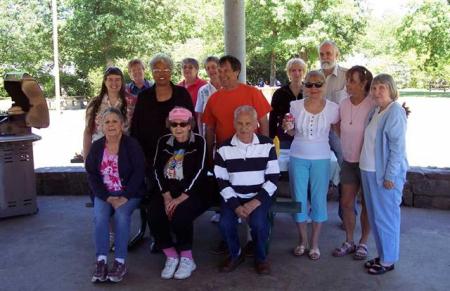 This story may be considered minor by many.  Not by this blogger.  Lately, I’m finding myself wishing more than one life.  There is so much to do.  There are so many causes.

I wish I had time to cover stories like this one.  It is a story of a neighborhood that is trying to keep its identity.  It is the story of a small group of concerned folks who are trying to keep their neighbors apprised of events occurring in their own backyard.

I congratulate Mr. John Lewis, Mr. Mark Toth, and those in the WVNA who care enough to organize and make their neighborhood a better place to live.

The Bible says, “Blessed are the peacemakers.”  This is a story about caring neighbors that worked with others to make things work.

I don’t know all of the details, as I am spread thin already.  I am very aware of the work that went into this effort along with other similar efforts made by these folks.  Here is the press release that I received today:

At its July meeting, the membership of the Whittington Valley Neighborhood Association (WVNA) approved a motion supporting the use of $45,000 in CDBG funds for infrastructure work to construct six new Habitat homes near Whittington City Park. The motion was made after representatives from Garland County Habitat for Humanity made a presentation detailing their future plans for the Valley. “Over the past twelve months, representatives from the Neighborhood Association and Habitat have been working in partnership to create new Habitat housing that is consistent with our neighborhood,” said Mark Toth, WVNA Vice-President.

In September 2009, the Hot Springs Board of Directors awarded Garland County Habitat for Humanity $45,000 in Community Development Block Grant funds to develop and build affordable housing in Garland County. In making the grant award, the City Directors added a stipulation that the funds could not be used on any projects in the Whittington Valley. This stipulation was added after several Valley residents objected to Habitat’s plans to build additional Habitat homes in the Valley. At that time, Habitat had built or was in the process of building 39 homes in the Valley and Habitat intended to use the grant money to begin construction on nine additional homes in the Valley. Valley residents voiced concerns that Habitat’s plans could lead to an over-saturation of low-cost, starter homes in a neighborhood that is struggling to retain its unique historic character.

During their presentation this past Monday, representatives from Garland County Habitat for Humanity (GCHH) explained how their plans for the Valley have changed over time. John Goodman, GCHH Executive Director, stated that the six new homes near Whittington City Park would differ substantially from the other houses constructed by Habitat in the Valley. These new homes would not be built as a “village” but rather would be located along existing city streets. And there will be no signs designating the homes as a Habitat development.

Goodman added that the architectural designs of the new houses were modified in response to community concerns. “Matt Synder of French Architects, has volunteered his time reworking the designs to make the houses fit with the existing neighborhood,” Goodman explained. Synder described the goal of the new designs: “The intention is to make the houses look like cabins in the woods rather than the other Habitat homes in the Valley.” This will be accomplished by modifying roof lines and integrating sizable porches on the front of each house. And equally important, each house will be different from its immediate neighbor.

Initially Habitat was going to build these six houses along Whittington Avenue, a major arterial roadway through the Valley. “The Neighborhood Association was concerned that the addition of six new houses right along a busy street such as Whittington Avenue could cause traffic problems,” said John Lewis, WVNA President. “We were also worried that locating these houses along Whittington would result in the loss of a beautiful forested buffer along the roadway,” said Mark Toth, WVNA Vice-President. In response to these concerns, Habitat has relocated the proposed houses to adjacent side streets. “The lots are long and narrow and the layout of the streets allows us to place the houses at the back of the lots, off Whittington,” said Habitat’s Executive Director, John Goodman. He added: “This way the forested greenway along Whittington will be preserved.”

Also during their presentation on Monday, Habitat stated that three other Habitat lots in the Valley would be sold. John Selig, founding member of the Garland County Habitat for Humanity, stated that a Habitat development would be inconsistent with the existing homes in that area. Selig and Goodman also stated that with completion of the six homes near Whittington City Park, Habitat in the future will build homes throughout Garland County, not just the Whittington Valley, with an emphasis on in-fill development. Habitat’s plans will focus on building individual houses on existing lots rather than constructing larger multi-house Habitat villages.

After Habitat’s presentation to the WVNA membership, a motion was made to support Habitat’s request to remove the restriction against using the appropriated CDBG funds in the Whittington Valley. The motion was approved. “I believe the members felt that Habitat had listened to the neighborhood’s concerns,” WVNA President Lewis said. “And by establishing a productive working partnership, we’ve balanced Habitat’s goal of providing affordable housing with our desire to retain our neighborhood’s unique historic character.”

This entry was posted on Tuesday, July 20th, 2010 at 9:59 PM and is filed under Commentary, News. You can follow any responses to this entry through the RSS 2.0 feed. You can leave a response, or trackback from your own site.