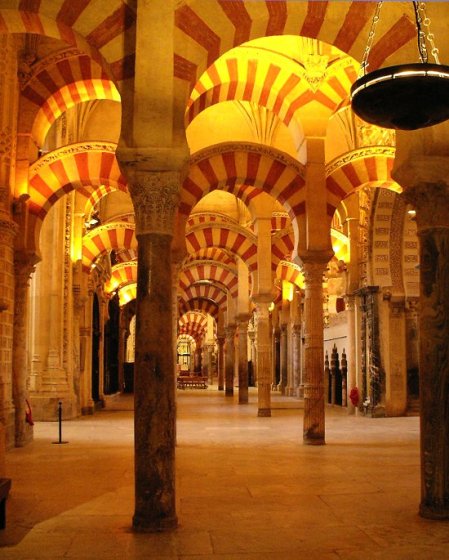 Interior of the Cordoba Mosque in Spain

The young lady who lives in Israel most of the time and calls her ministry “Love Without Borders” sent this information out to those on her email list.  She is currently touring California sharing news about recent events in the Holy Land.  Her ministry is not confined to Jews and Christians.  She also helps Muslims.  She is a good source of news from a Christian who lives in Israel. – CR

The original name for the proposed New York Mosque and Interfaith Center is “Cordoba.”  This is a very significant and important name in Islam. The reason is because Cordoba symbolizes victory. When Islamic forces defeated the Spanish they built a HUGE mosque on top of the destroyed Spanish churches as a symbol of Islam conquering Christianity.  This happened in Cordoba, Spain. For more information you can google ‘Cordoba, Spain’. Click on ‘History’ and read about ‘The Great Mosque of Cordoba’.

The above email is validated by other, easily found information. The following article quotes a peaceful Muslim American who served in the U.S. Navy as a physician.  The title of the planned mosque is discussed in the article. – CR

This entry was posted on Thursday, August 19th, 2010 at 7:03 AM and is filed under Commentary. You can follow any responses to this entry through the RSS 2.0 feed. You can leave a response, or trackback from your own site.