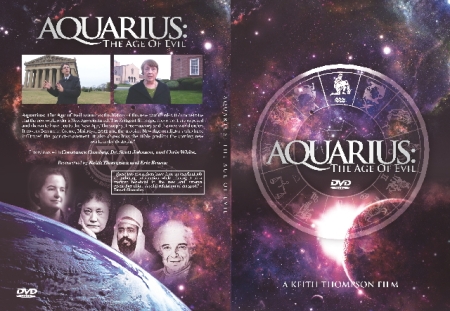 A young Christian researcher and film maker, Keith Thompson, has published an outstanding work on the topic of the one world religion movement.  His latest film, Aquarius: The Age of Evil, is a look inside the beliefs of One World /New Age occultists.

I am saddened that our young people have to deal with such subjects, but thankful that God has gifted young people like Keith Thompson to help his generation understand the times in which they live.

The following quote is from an interview Keith did last week:

“The global elite (that we call the New World Order) believe in certain things.   Their plan is not just political.  That’s a common misconception that people have.  They think that these elite are just in it for the money, the power, etc.  That’s not the case.  If you look at a lot of these individuals, they have very esoteric and occult beliefs. The main thrust of the New World Order is based on a concept that is known as “The New Age.”

Keith goes on to say that the New Agers believe that we are coming out of the age of Jesus (Pisces) and that we will have a new teacher in the Age of Aquarius.

“Many of these occultists say that the Age of Aquarius will be a one world utopia accompanied by a one world government and a one world ruler.  So, when you look at these New World Order people like Robert Muller, former Assistant U.N. General Secretary…they are all followers who believe that this new age is going to produce…this one world system.”

About a year ago, an acquaintance told me that I should watch the Zeitgeist “movie” on You Tube.  I did.  I found some of the information interesting.  The problem with it: Christianity is marginalized and discredited.  There’s a lot of that going on these days.

What makes Christianity unique is its risen Savior.  Anyone who wants to read about this matchless truth need only look as far as their nearest Bible and the book of Acts (Acts is directly after the four gospels).  The book of Acts describes events in the early church; after Jesus ascended into heaven.  Acts 4: 8-12 states:

8Then Peter, filled with the Holy Spirit, said to them, “Rulers and elders of the people,

9if we are on trial today for a benefit done to a sick man, as to how this man has been made well,

10let it be known to all of you and to all the people of Israel, that by the name of Jesus Christ the Nazarene, whom you crucified, whom God raised from the dead–by this name this man stands here before you in good health.

11“He is the STONE WHICH WAS REJECTED by you, THE BUILDERS, but WHICH BECAME THE CHIEF CORNER stone.

12“And there is salvation in no one else; for there is no other name under heaven that has been given among men by which we must be saved.”

This last verse is under assault from hundreds of different directions.

We hear a great deal about a New World Order these days.  Mr. Obama used a similar term in his West Point commencement speech on Saturday.  He said: “We have to shape an international order that can meet the challenges of our generation.”

Less than a minute later he said it again: “The international order we seek is one that can resolve the challenges of our times.”  The man was talking to talented young Americans who have chosen to defend this nation and he has the nerve to talk of an international order on the day of their graduation?

Here’s the video.  KARK played the clip on the 6:00 news. You can judge for yourself the intent of the statement:

(I had a link here but it was removed because of “third party copyright infringements.”)

Mr. Obama’s statement is a sign that a one world government is coming.  There as so many other signs.

This is the reason that Keith Thompson’s work is timely. His documentation is flawless and his theology is Biblically sound.  The film is well worth your time.

Keith’s original intent was to upload the movie to his You tube channel so that it would be free to all.  After uploading the movie into sections, parts of it were “flagged” and removed by You tube.  Someone complained that sections of the documentary made false statements.

What was false were the allegations as all of Keith’s work was backed by documentation.  Unfortunately, this fact didn’t stop parts of the film from being “flagged” and removed.

Keith ended up selling the DVD on two different websites.

Months later, all sections are up in various places on You tube and the documentary can be seen in its entirety for free.

This is a 2 ½ hour documentary. I have read the entire text of the documentary and have sent a review to Keith.  He was appreciative of my remarks.

The Movie – Aquarius: The Age of Evil

You can TRY THIS ONE.

This probably won’t work, as the links surrounding this movie, including interviews, change constantly.

Your best bet is to go to YouTube and type in: The Movie – Aquarius: The Age of Evil

This entry was posted on Saturday, May 22nd, 2010 at 8:34 PM and is filed under Bible Prophecy, BIG GOVERNMENT, Commentary, globalization, News. You can follow any responses to this entry through the RSS 2.0 feed. You can leave a response, or trackback from your own site.