“Now he is killing his own people” 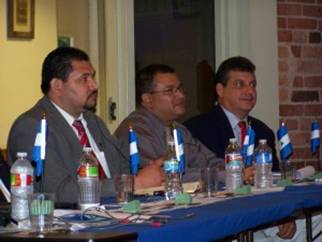 Received here only a few days ago…

“Hi Chris, do you remember me? I am Aníbal Rosales, from your article “Nicaraguan Patriots Visit Hot Springs” in October 2009. It is very sad what Nicaragua is living now, what in 2009 seemed like a distant future has arrived. Ortega took all the powers of the state, the presidency, the supreme court of justice, the electoral power and the assembly, he completed his project of dictatorship. Now he is killing his own people, for having raised us to protest against him, since last April 18, more than 350 people have died, there are more than 500 unjustly arrested, many disappeared and many people fleeing in Costa Rica and others living hidden in safe houses, so that the government does not kill them. We have a real humanitarian crisis, there are thousands of people who need shelter, food and medicine. If you can, tell this story to our friends in Hot Springs.”

After searching the internet for news of this situation, I’ve found that Anibal is not exaggerating. It is very sad news, indeed. The Nicaraguan Patriots who visited Hot Springs were, at the time, working to reverse the corrupt government of Nicaraguan President Daniel Ortega. They came here to get ideas on how to do just that. It is one of the highlights of my 23 years in Hot Springs.

From the several news sources that I’ve read, the Catholic Churches are being targeted in particular and, of course, anyone who protests the government policies. Anyone who wishes to see the article Anibal is referring to may see it here:

http://www.ggggnews.com/News.htm (You will have to scroll down to the September 18th, 2009 entry. It is not that far down the page!)

The article describes corruption that these brave men were dealing with at the time. It was bad then, but as Anibal has noted, things have deteriorated substantially.

Please pray for our friends in Nicaragua.

The few articles I have read recently (The first two were published yesterday):

Nicaragua: How Ortega’s Fragile Alliance Of The Elite Set The Stage For Crisis

“Ortega has been president of Nicaragua since 2007, and oversaw the abolition of presidential term limits in 2014. His wife, Rosario Murillo, is also his vice president.”

This entry was posted on Sunday, August 19th, 2018 at 3:13 PM and is filed under Commentary, Education, Hot Springs News, News. You can follow any responses to this entry through the RSS 2.0 feed. You can leave a response, or trackback from your own site.