“What July Fourth Means to Me” by Ronald Reagan 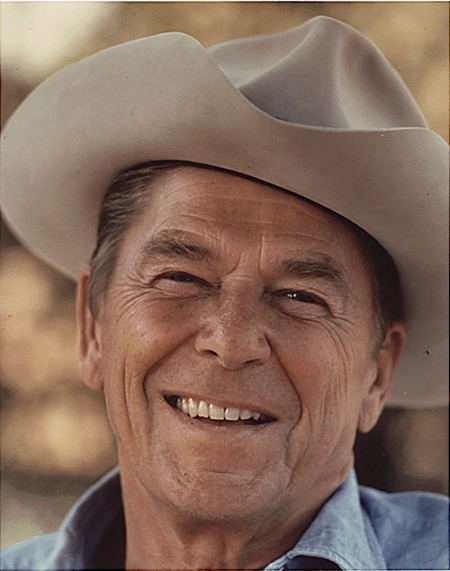 Ronald Reagan wrote the following for Independence Day in 1981.  It was not written by someone else for the President.  These are Mr. (President at the time) Reagan’s own words that were written with his own hand:

“What July Fourth Means to Me”

For one who was born and grew up in the small towns of the Midwest, there is a special kind of nostalgia about the Fourth of July.

I remember it as a day almost as long-anticipated as Christmas. This was helped along by the appearance in store windows of all kinds of fireworks and colorful posters advertising them with vivid pictures.

No later than the third of July – sometimes earlier – Dad would bring home what he felt he could afford to see go up in smoke and flame. We’d count and recount the number of firecrackers, display pieces and other things and go to bed determined to be up with the sun so as to offer the first, thunderous notice of the Fourth of July.

I’m afraid we didn’t give too much thought to the meaning of the day. And, yes, there were tragic accidents to mar it, resulting from careless handling of the fireworks. I’m sure we’re better off today with fireworks largely handled by professionals. Yet there was a thrill never to be forgotten in seeing a tin can blown 30 feet in the air by a giant “cracker” – giant meaning it was about 4 inches long. But enough of nostalgia.

Somewhere in our growing up we began to be aware of the meaning of days and with that awareness came the birth of patriotism. July Fourth is the birthday of our nation. I believed as a boy, and believe even more today, that it is the birthday of the greatest nation on earth.

There is a legend about the day of our nation’s birth in the little hall in Philadelphia, a day on which debate had raged for hours. The men gathered there were honorable men hard-pressed by a king who had flouted the very laws they were willing to obey. Even so, to sign the Declaration of Independence was such an irretrievable act that the walls resounded with the words “treason, the gallows, the headsman’s axe,” and the issue remained in doubt.

The legend says that at that point a man rose and spoke. He is described as not a young man, but one who had to summon all his energy for an impassioned plea. He cited the grievances that had brought them to this moment and finally, his voice falling, he said, “They may turn every tree into a gallows, every hole into a grave, and yet the words of that parchment can never die. To the mechanic in the workshop, they will speak hope; to the slave in the mines, freedom. Sign that parchment. Sign if the next moment the noose is around your neck, for that parchment will be the textbook of freedom, the Bible of the rights of man forever.”

He fell back exhausted. The 56 delegates, swept up by his eloquence, rushed forward and signed that document destined to be as immortal as a work of man can be. When they turned to thank him for his timely oratory, he was not to be found, nor could any be found who knew who he was or how he had come in or gone out through the locked and guarded doors.

What manner of men were they? Twenty-four were lawyers and jurists, 11 were merchants and tradesmen, and nine were farmers. They were soft-spoken men of means and education; they were not an unwashed rabble. They had achieved security but valued freedom more. Their stories have not been told nearly enough.

John Hart was driven from the side of his desperately ill wife. For more than a year he lived in the forest and in caves before he returned to find his wife dead, his children vanished, his property destroyed. He died of exhaustion and a broken heart.

Carter Braxton of Virginia lost all his ships, sold his home to pay his debts, and died in rags. And so it was with Ellery, Clymer, Hall, Walton, Gwinnett, Rutledge, Morris, Livingston and Middleton. Nelson personally urged Washington to fire on his home and destroy it when it became the headquarters for General Cornwallis. Nelson died bankrupt.

But they sired a nation that grew from sea to shining sea. Five million farms, quiet villages, cities that never sleep, 3 million square miles of forest, field, mountain and desert, 227 million people with a pedigree that includes the bloodlines of all the world. In recent years, however, I’ve come to think of that day as more than just the birthday of a nation.

It also commemorates the only true philosophical revolution in all history.

Oh, there have been revolutions before and since ours. But those revolutions simply exchanged one set of rules for another. Ours was a revolution that changed the very concept of government.

Let the Fourth of July always be a reminder that here in this land, for the first time, it was decided that man is born with certain God-given rights; that government is only a convenience created and managed by the people, with no powers of its own except those voluntarily granted to it by the people.

We sometimes forget that great truth, and we never should.

This entry was posted on Sunday, July 4th, 2010 at 7:30 AM and is filed under Words that Uplift. You can follow any responses to this entry through the RSS 2.0 feed. You can leave a response, or trackback from your own site.