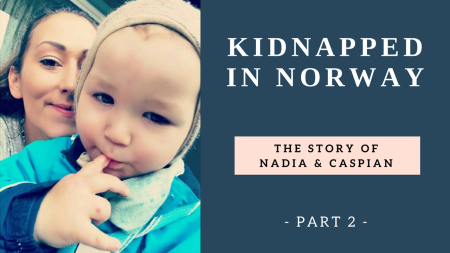 It seemed to be the perfect happy ending for Nadia and her sweet little son Caspian. Caspian was taken by Norway’s Child Welfare System, barnevernet, in June of 2016. With the help of a good lawyer, international pressure, prayer and social media activities, Nadia won her case in September and Caspian came straight home.

They both stayed at Margaret and Dag Hennum’s home for a while, a lovely Christian couple, where they started to recover from the horrible trauma that Norway’s Child Welfare System had just caused in their lives. Even though the case was closed and Caspian was returned to his loving mother, barnevernet never apologised for their mistake.

In February 2017 Nadia moved to Ulsteinvik, looking forward to starting a new life. With her own new apartment and with a place for Caspian in a Kindergarten she was looking forward to finally leaving that dark chapter behind. Also, she was happy to establish new relationships with new people in the neighborhood who didn’t know anything about her past struggles with barnevernet. Everything seemed perfect, but things were about to change.

“It all started recently with a phone call that was listened to legally, and barnevernet was contacted about this. I’ve read this report and it states that Nadia said during the phone call that she had a headache.“

Two women from barnevernet with two policemen then showed up at Nadia’s new apartment. But Nadia wasn’t there because she was visiting friends. For several hours barnevernet were sneaking around the house like the former DDR-Stasi would and stayed until evening to see whether she would come home or not. They also interviewed the housekeeper about her parental skills. They even forced the owner of the house, helped by two policemen, to open Nadia’s apartment for them.

Once again they were violating Nadia’s rights. They didn’t have any legal grounds for these actions against her and what’s even worse they have again completely ruined both Nadia’s and Caspian’s whole new life. Barnevernet has totally destroyed her reputation and trust in the neighborhood​ and have terrorised her so much that Nadia had to cancel the apartment and Caspian’s place in the kindergarten.

Now, Nadia has to find a new place again to live.

Who is responsible for this never ending nightmare? It is barnevernet in Volda, and its leader Brynhild Solvang. And it is Anne-Beate Vartdal and Eva Andreassen Lynge who forced themselves into Nadia’s home, and it is Mr. Kyrre Grimstad. After this incident he wanted to force Nadia into a meeting but she was wise enough not to go. He left a message saying that barnevernet needs to know where she is, even though her case is closed. He also tried to contact Margaret and Dag Hennum in order to get hold of Nadia and Caspian. It is Mr. Grimstad who is responsible for not letting this mother and child live a normal life.

Shame on him and shame on Norway for not following standard legal procedures and for not respecting Human Rights and for causing so much pain in peoples lives.

This entry was posted on Monday, September 4th, 2017 at 11:40 PM and is filed under Commentary, Education, News. You can follow any responses to this entry through the RSS 2.0 feed. You can leave a response, or trackback from your own site.