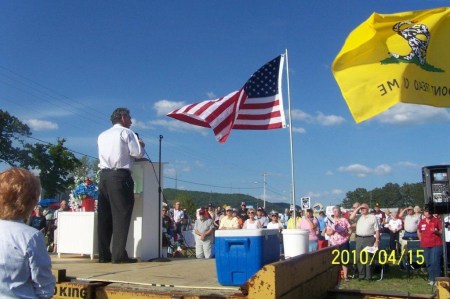 Yesterday’s TEA Party Rally at the Hot Springs Airport made the front page.  Finally, the local TEA Party got some press.  It was at the top of today’s paper.  A closer glance made this local semi-retired semi-journalist wince.

The article makes the local periodical’s views as visible as the “Don’t tread on Me” flag that was flying at Memorial Field.

Not a word is written about who spoke at the rally.  There is a nice picture, but not one quote from a local speaker or attendee.  The Associated Press story that accompanies the nice picture quotes a few national leaders.  Glenn Gallas, a Hot Springs area resident running for the U.S. House of Representatives, and a speaker at the event, isn”t even mentioned.

Most of those who went to the airport yesterday would agree with the “gangster government” quote by Republican Rep. Michele Bachmann of Minnesota.  This quote was mentioned twice in the article.  This quote, however, is unbalanced in its attempt to brand TEA Party participants as those who are unable to put more than a few words together.  I have heard the CHAIRMAN of the United States House of Representatives Judiciary Committee try to explain where it says in the Constitution that the citizens of the U.S. can be forced to buy a government health care plan.  Many TEA Party speakers that I’ve heard seem to understand the Constitution better than Mr. Conyers, the Constitutional lawyer.

Whether one agrees with the efforts of the tea party or not, it is a newsworthy event because of the number of folks who are very upset with the direction they see our government heading.  I, for one, am appreciative of those like Mr. Gallas who want to get us back on Constitutional track. They are spending their time are resources to try to make a difference.

Like Mr. Gallas and many others, I believe the next election will tell us where we are one way or another.  Are there enough Republicans and Democrats willing to stand up for what’s written in the Constitution, or are we more concerned about becoming more like other nations?

I am disappointed that the local paper sent only a photographer.

It did send a reporter to the Good Government Group’s Candidate Forum, which was held at the Library at the same time as the TEA Party Rally.

I applaud the GGGG for attempting to help us get acquainted with  those who will be running for office.  The article focused on Terry Smith’s comment that Jo West-Taylor violated Arkansas law.  Mr. Smith is running for Garland County Treasurer and I think he should wait until Ms. West-Taylor is in the room to make such allegations.  The best  Treasurer candidate is running as a Republican, but that’s a story for another day.  The article about the local TEA Party effort should have had some of the local flavor that the GGGG political forum piece displayed.

The local paper knows that it must “cover” these events to keep selling its wares.

On the TEA Party article – It’s attempt to make both sides happy, one side with a large picture, and the other side with an article that’s got no teeth is, at the least, self-serving.  I think the article is an obvious indication of where the paper stands politically.

On the GGGG political forum article – It did what papers do to try to sell papers. It focused on  a controversy.  Why does the paper print editorials from those who oppose its own obvious views?  That’s an easy one.

The GGGG must be taken seriously.  The organization does work that the city (and the county) should be doing.  If it wasn’t for the GGGG, there would be no citizen committee looking into the best way to handle the jail situation, probably the biggest problem the community faces at present.  Because the GGGG is beginning to shake off some of the dirt slung at it from the local elite, dirt that has been printed in the media source that most Hot Water City residents read, the organization is now getting some notice in the same source.

(Wouldn’t you like to know, just once, who wrote any editorial piece in the local paper?)

This entry was posted on Friday, April 16th, 2010 at 9:25 AM and is filed under Commentary, Hot Springs News. You can follow any responses to this entry through the RSS 2.0 feed. You can leave a response, or trackback from your own site.