An American Horror Story: Do criminals have more rights than parents in Tennessee? 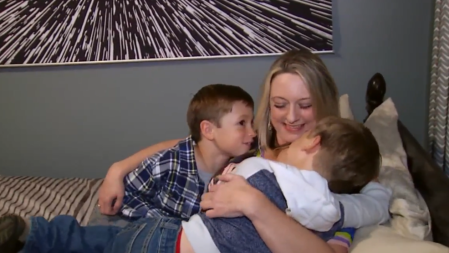 Tori Harper and Her Children
Photo found at
http://newschannel9.com

NASHVILLE, Tenn. (WZTV) — It is pretty hard to believe that serial killers
have more rights than parents in Tennessee, but once you enter the Juvenile
Justice System, anything can happen.

And even if you do absolutely nothing wrong, your children can be taken
from you. It may sound like a ridiculous question but not when you consider
what happened to a Williamson County, Tennessee, mom.

It all started when Tori’s 3-year-old son told her something inappropriate
happened to him when he was with their father. The couple is divorced.

Tori followed the law and reported it to DCS.

“I was interrogated for two to three hours with no videotape, no attorney
present,” Harper said. “I was a little intimidated, but at that time I
still didn’t think I had done anything wrong when I realized they were
investigating me.”

Remember, there is no allegation against Tori Harper, yet DCS asked her to
surrender her kids on the spot and relinquish custody during the
investigation.

“There was no way I was going to give strangers custody of my children even
for a day or two especially with that going on,” Harper said. “I wanted my
children.”

The next day she said DCS secretly went to Williamson County Juvenile Judge
Sharon Guffee and asked for an ex-parte order to get custody of the kids.
The judge signed the order even though Tori wasn’t present to defend
herself.

“I’ve never had a speeding ticket,” Harper said. “I have no mental health
history. I’m a good mom. I love my kids. I was a room mom that year for my
oldest son.”

Her lawyer, family law specialist Connie Reguli, said this is standard
practice, and it is nasty stuff.

“For people who don’t know what e x-parte means it is behind the back,”
Reguli said. “They knew Tori. They certainly had an opportunity to get it
before the court. Instead they get an ex-parte order to get her children in
custody of DCS. DCS can do whatever they want to them. They obviously
didn’t want Tori or her lawyer there.”

The only consolation was that Tori’s parents would be the foster parents
during the investigation. When they all went back to court, Judge Guffee
ordered Harper and her parents be drug tested eventhough none of them had
any drug history.

Her father couldn’t get to the drug test because he was keeping the kids
and didn’t have car seats. Harper said DCS locked herself and her mom in a
room after their drug tests and told them they would send a squad car out
with the boys’ car seats so Harper’s dad could go take the drug test.

Once police finally arrived at the home, they brought a new court order
signed by Judge Guffee giving DCS custody of the kids, who were going into
foster care that night.

“The things that these people did to our family was so against our fourth
amendment rights,” said Tori’s dad Tom Naïve. “I said boys you got to go
with the policeman and so I watched them walk to that police car and get in
the back of the police car. All I could do is go inside and blow up and
blow up. I was helpless.”

“I was scared,” Ethan said. “When I got in the car, I started crying. They
told me my grandpa didn’t want me. He had never told me that. It hurt my
heart.”

This family without a single allegation of abuse or neglect or even a
failed drug test lost their two boys to DCS.

“There is nobody that knows me that would say there is anything I love more
than being a mom,” Harper said. “But one thing I know is I am a good mom, a
good mom and I love my kids so much.”

So what was DCS and the court hinging this removal on? That Tori Harper was
mentally unstable. She got an independent psychological evaluaton and
passed flying colors; doctors, dentists, records, report cards, high test
scores formed a lazer-focused rebuttal to DCS and Williamson County
Juvenile court.

DCS dismissed the case and Judge Guffee returned the children to Harper.
The children were in state custody for two months.

Family law attorney Connie Reguli said this story may sound shocking, but
it is common.

“Criminals have more rights and protections than parents,” Reguli said.
“Once they have your children in the system they are in total control…and
while this may have a happy ending. There are scars and trauma, real
trauma.”

“So when i got my son back, keep in mind he always held my hair when I
would sing him to bed every night,” Harper said. “Well when he was in
foster care he was so upset that he would pull his own hair in bed, and he
ended up with a big bald spot.”

Her son Andrew now believes in monsters and holds his mom’s hair, praying
they will never come back.

DCS said the law prohibits it from commenting on specific juvenile case but
pointed out that all of its actions were approved by a judge. Tennessee
judges are also prohibited from discussing cases.

This insanity is not only happening in Norway, Sweden, Denmark, Finland, the UK, and other countries, the UNITED STATES is seeing similar cases. We need to be vocal and vigilant. Christians are praying on so many fronts these days. This blog has focused more than a bit on the sad CPS situation in several European countries. Maybe I have not been good enough to express the problem in my own nation. If stories like this keep happening, there will be more posts like this one. At least Tori has her kids back, something that rarely happens in Norway. It’s bad enough to have American children stolen by foreign governments, as in the Amy Jakobsen case, but here, in the U.S.? I recently talked to a good American who knows of someone who had their child stolen from them here years ago. Abuse of children is too important to ignore. I will continue to try and alert people about this problem.

This entry was posted on Thursday, February 15th, 2018 at 8:23 PM and is filed under Commentary, Education, News. You can follow any responses to this entry through the RSS 2.0 feed. You can leave a response, or trackback from your own site.

2 Responses to An American Horror Story: Do criminals have more rights than parents in Tennessee?