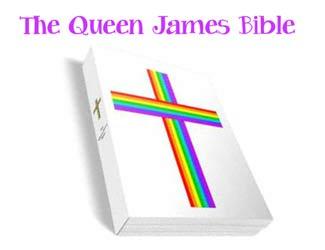 …………………………..I heard about this at Pastor Silva’s informative website called Appraising Ministries.  Here is his take on this new “Bible.”  And here is where you can see how Amazon described this “gay Bible.”

Here is part of the book description:

“The Queen James Bible seeks to resolve interpretive ambiguity in the Bible as it pertains to homosexuality: We edited those eight verses in a way that makes homophobic interpretations impossible.”

In other words, the Queen James bible (can’t use the capital B anymore) has found a way to explain away the (at least) 8 places where the Bible says that homosexuality is a sin.

I was listening to a roundtable political discussion on TV the other night and the consensus seemed to be that, with cases pending at the Supreme Court, gay marriage will eventually be the law from coast to coast as it is in Canada.  They (conservative and liberal) all thought the Defense of Marriage Act will be gone soon.

There is a higher court than the U.S. Supreme Court.

It is not on planet earth.

Christians are to love the sinner and hate the sin.  We are all sinners, but we are not to continue in a sinful lifestyle.

Here are four verses that will have to be explained away:

I found these four verses in a good essay on homosexuality by Matt Slick here.

This “bible” is another sign of the times in which we live.

Thank God for His unconditional love.  It is a love that can release us from the bondage of sin.

This entry was posted on Sunday, December 16th, 2012 at 11:57 PM and is filed under Commentary, News, theology. You can follow any responses to this entry through the RSS 2.0 feed. You can leave a response, or trackback from your own site.

4 Responses to THE QUEEN JAMES bIBLE