THE ACCEPTANCE OF HOMOSEXUALITY – A SAD INDICTOR OF WHERE WE ARE 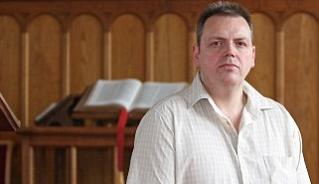 Dale McAlpine, a Baptist preacher who has been preaching on the Streets of London for years

__________Attached is a recent story about a preacher in England who was arrested for preaching that homosexuality is a sin.  On the day that he was taken to jail, one of the people listening to him was the “Lesbian, Gay, Bisexual, and Transgender liason officer” for the local police department.

Some of you may be aware that I tried to contact every pastor in Garland County attempting to get them involved in signing a petition to get ACT 1 on the ballot of 2008.  Only 1 in 3 chose to get involved.  The Arkansas Family Council had done extensive work making sure that it was legal for churches to be involved in the petition drive.  The churches were informed of this fact.

The reason I spent so much of my time trying to get churches to sign petitions was because of my concern for the children being placed in foster and adoptive homes with homosexual couples.  I imagine the negative impact such an environment has on a young mind.

Of 100,000+ residents in Garland County, my guess is that 50,000 are old enough to vote and that 40,000 would call themselves Christian.  Sadly, only a little over 4,000 signatures were gathered in Garland County.  Many religious leaders, including elders and deacons in Garland County churches, turned down the opportunity to help protect young children.  IF THE CHURCHES WILL NOT PROTECT OUR KIDS, WHO WILL?

In spite of the poor showing in many counties in Arkansas by the churches, enough signatures were gathered to get ACT 1 on the ballot.  The people of Arkansas voted to approve the law 57% to 43%.

Just recently, ONE Arkansas judge ruled that the law is UNCONSTITUTIONAL.  It remains to be seen if this one judge is going to overrule the will of the entire state.

Unfortunately, many church leaders were AFRAID OF OFFENDING THOSE SITTING IN THEIR PEWS.  Why bother going to church if the Bible is not the guidepost?

The good thing that came from the 2008 petition drive was that it became obvious where the men of God were.

I would be the first to say that we are to love all sinners.  I am a sinner, a truth that becomes more evident with age.

Fortunately, there is a way to have our sins forgiven.  We must tell God we are sorry by changing our behaviors. The Bible is clear that repentance is necessary for forgiveness.  Jesus said to the woman caught in adultery, “Go and sin no more.” This is true repentance.

Thus, we should love homosexuals, but not deny that their behavior is a sin.  Would we be loving them if we told them something other than the truth?

The story about the English preacher: http://www.bible-prophecy-today.com/2010/05/its-getting-dangerous-out-there.html#ixzz0n3mEVrGu

This entry was posted on Thursday, May 6th, 2010 at 7:26 AM and is filed under Commentary, Hot Springs News. You can follow any responses to this entry through the RSS 2.0 feed. You can leave a response, or trackback from your own site.