THE BEAR IS GROWLING 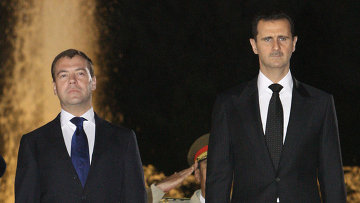 Once again, the gathering of this information was made easier by Christian news sources.  The secular news doesn’t understand how important these developments are.

Surprisingly, CBS had an online story about this meeting.  Was it was seen in the print or T.V. media?  It’s doubtful.

“Russian diplomats said the long-stalled Mideast peace process, Iran’s nuclear program and bilateral arms trade between the two countries were expected to be key topics for the two-day visit, the first ever to Syria by any Russian or Soviet head of state.”

“Analysts say Moscow’s influence in the Middle East will in many ways depend on its relations with Syria, an increasingly important regional player with tight ties to Iran, Hezbollah and the Palestinian militant group Hamas, which has its political headquarters in Damascus.

Russia, with the European Union, the United Nations and the United States, is a member of the international quartet for Middle East peace and has long sought to expand its clout in the region.”

“Medvedev’s visit comes amid reports that he he’ll honor a deal with Damascus for the sale of an advanced anti-aircraft defense system.”

“Israeli Prime Minister Binyamin Netanyahu has personally flown to Moscow in the hope of preventing the weapons deal, but Medvedev would only agree to a delay, unwilling to cancel the deal. The Russian leader justified the sale by saying the weapons system is a defensive one, not an offensive one.”

“Syria has insisted that the promise of an Israeli withdrawal from the Golan Heights be a precursor to any renewed peace negotiations between the two countries. Netanyahu has vehemently rejected the notion of a withdrawal.”

The complete article may be seen here:

“”The situation in the Middle East is getting worse and an increase of tensions would be extremely dangerous,’ Russian President Dmitry Medvedev said on Tuesday during his visit to Syria.
“‘Any future flare-up of the Mideast situation is fraught with the danger of catastrophe,’ Medvedev said during a joint news conference with Syrian President Bashar al-Assad.”

“‘I have personally emphasized that Russia will do everything possible to restore Mideast peace talks under the existing international legal base,’ he added. ‘The situation is deteriorating, becoming more complicated, and it negatively affects the general climate in the Middle East.'”

“The president said Russia was ready to make every effort and hold a Middle East peace conference in Moscow that would achieve “at least some intermediate results.”

“Syria’s main demand within the peace process is the return of the Golan Heights, occupied by Israel during the Six-Day War in 1967.”

“Al-Assad said his country was ready to negotiate on all issues as soon as the occupied territories are returned to Syria.”

“‘Syria cannot agree to a deal under which it gets back only a part of the occupied Syrian land,’ the president said.”

There you have it.  Neither side will make concessions on the issue of the Golan Heights.  Israel can’t be blamed.  If they were to give up the Heights, they would be giving up one of their most strategic positions.  It helps protect them from the north.  Any military man will tell you that you never give up the high ground.

Articles relating to these events and seen from different angles, can be found at the following site:

This story has many implications.  It’s only a matter of time to see what comes of it.

This entry was posted on Tuesday, May 11th, 2010 at 8:40 AM and is filed under Bible Prophecy, Commentary, News, The Middle East. You can follow any responses to this entry through the RSS 2.0 feed. You can leave a response, or trackback from your own site.