WE INTERRUPT THIS PROGRAM… 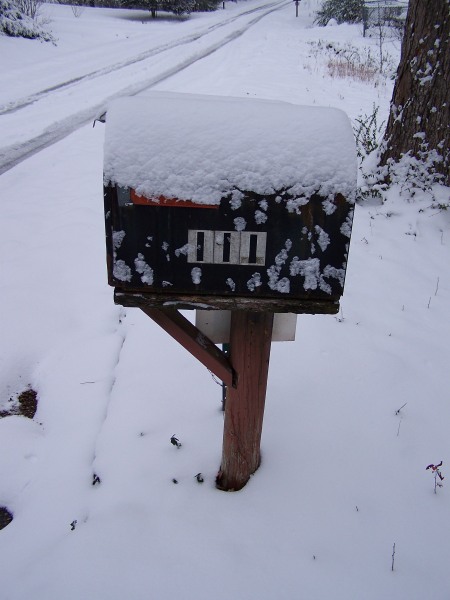 The plans of nearly everyone in a four state area have been interrupted.

For almost a week they told us it was coming.  We listened to them with reservation because the experts have been consistently wrong lately.

This time the meteorologists were right.  One guy went a bit far, predicting what he called “Snowmageddon.”  We got 4-7 inches and it was snow, not the snow/ice mix we get a few times a year.

If Arkansas gets four inches of snow, the place shuts down.

Most of those in the North would consider us snow-challenged.

My better half has been teaching her little students about winter and today they will have a home-based field trip.  Snowmen will be everywhere.

The teen son is whistling. He doesn’t ever whistle on a Monday morning when school is facing him.  The words “No school” bring a joy that only a child (and many teachers) can understand.

The teen daughter will reschedule her biannual appointment with her transplant doctor.  How many doctors are looking out their windows this morning and sound just like my son?

And then there’s yours truly.   No complaints here.  The clients will have to wait (with bated breath I’m sure).

I’m sitting here, as I type, eating a plate of hash browns and eggs.  The potatoes have just the right gob of ketchup on them, the scrambled eggs made with cheddar and salsa.  There’s so much here I’m going to eat half and save the rest for dinner.

I have just been handed a side dish of sliced pears.

How I ended up with a wife who has so many talents I’ll never know.  The homemade breakfast thumps the usual Monday morning fare.

I usually throw a handful of oatmeal in a bowl and pour some boiling water on it. A few chocolate chips and a sprinkle of cinnamon and I’m happy.  A spoonful of peanut butter is added to the menu if I feel I haven’t had enough protein lately.

It’s quick and easy, fits the program, and is supposed to lower the bad cholesterol.

We have been forced to change our plans.

It is a wonderful thing.

Snow always reminds me of God’s grace.  I might not have this opinion had I grown up in Minnesota.  Nevertheless, there’s something about layers of water in a pure white fluffy form that creates a covering.  God’s creation is the ultimate object lesson.

1How blessed is he whose transgression is forgiven,
Whose sin is covered!

God used David to pen these words and used Paul to repeat them (Romans 4:7).

So…who qualifies to have their sins “covered?”

It couldn’t be clearer.  Everyone qualifies.  The snow is covering the houses of believers and unbelievers alike.  Jesus died for everyone, even those who will never believe.

“that whosoever believes in Him shall not perish, but have eternal life.”

18“Come now, and let us reason together,”
Says the LORD,
“Though your sins are as scarlet,
They will be as white as snow;
Though they are red like crimson,
They will be like wool.”

Our schedules have been interrupted.

It is an opportunity.

The great prophet knew, hundreds of years before the Messiah came, that forgiveness was possible.  The first chapter of Isaiah says it well:  “Come…”

The crimson stain can be removed.  It can be as white as snow.

8“If we say that we have no sin, we are deceiving ourselves and the truth is not in us.

9If we confess our sins, He is faithful and righteous to forgive us our sins and to cleanse us from all unrighteousness.” (1 John)

What a beautiful day it is.

This entry was posted on Monday, January 10th, 2011 at 12:36 PM and is filed under Commentary, News. You can follow any responses to this entry through the RSS 2.0 feed. You can leave a response, or trackback from your own site.

4 Responses to WE INTERRUPT THIS PROGRAM…