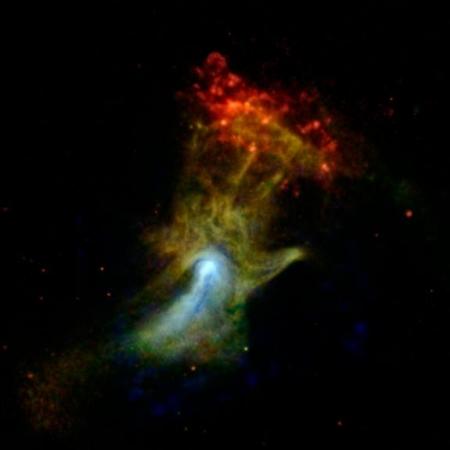 Recently, a picture from outer space was posted that some thought looked like the “Hand of God.”

I am including the entire article from afa.net (found in my links) because I had some problems with a link to the article.

Writing about it for space.com (1/9/14), Tanya Lewis said, “The hand might look like an X-ray from the doctor’s office, but it is actually a cloud of material ejected from a star that exploded.”

She began her piece, noting, “Religion and astronomy may not overlap often, but a new NASA X-ray image captures a celestial object that resembles the ‘Hand of God.’”

But I think religion and astronomy have indeed overlapped far more than people realize. And not just astronomy, but science in general.

There is often a perceived incompatibility between religion and science. I think that is especially true after the rise and acceptance of Darwinism in the late 19th century.

However, it’s interesting to note that essentially modern science was born in a Christian milieu about 500 years ago—with early contributions from the ancient Greeks.

All the great leading scientists initially were Bible-believing Christians. They believed that they were—in the words of astronomer Johannes Kepler—“thinking God’s thoughts after Him.”

They understood that a rational God had made a rational universe, and it was their job as scientists to discover those laws that the Creator had impressed into His creation.

Kepler (1571-1630) wrote, “Since we astronomers are priests of the highest God in regard to the book of nature, it befits us to be thoughtful, not of the glory of our minds, but rather, above all else, of the glory of God.” The scientists were thus God’s priests, in Kepler’s view.

To the consternation of some unbelievers, Sir Isaac Newton, perhaps the greatest scientist who ever lived, wrote more on Christian theology than he did on science.

Newton saw God’s powerful hand in His creation. He once said, “Atheism is so senseless. When I look at the solar system, I see the earth at the right distance from the sun to receive the proper amounts of heat and light. This did not happen by chance.”

Sir Francis Bacon is credited with having been the inventor of the scientific method—that combination of induction and deduction, of hypothesis and proof (empirical proof). Bacon was a devout Christian.

In 1660, the Royal Society of London for Improving Natural Knowledge was founded. This prestigious organization, still in existence today, is the oldest such institution still in operation.

James Moore of the Open University in England notes it was founded in a Puritan college (Gresham), and virtually all its early members were Puritans—at a time when Puritans were a small minority. He said that Protestantism “encouraged the birth of modern science.”

I had the privilege of doing some TV interviews at the Royal Society (for our special on “What If Jesus Had Never Been Born?”—hosted by the late D. James Kennedy).

One of those I interviewed was physicist Sir Alan Cook. He said, “One of the implications of the incarnation is that Christ took human form upon Him, including the power of thinking about things and observing things. It seems to me that an implication of the incarnation is that we, those of us who are able to, have a Christian obligation to study the world as God’s creation.”

I’ve had the privilege of interviewing on several occasions for my radio show Dr. Stephen Meyer, who earned his Ph.D. in the philosophy of science at Cambridge. Dr. Meyer, a fellow at the Discovery Institute, is the author of the New York Times bestselling book, Darwin’s Doubt.

I asked Dr. Meyer for a statement for this particular article. He wrote me: “Far from conflicting, the overwhelming scientific evidence of design in life and in the universe—in the digital code stored in DNA and in the fine tuning of the laws of physics, for example—clearly shows that science can—and does—provide support for a theistic view of reality.”

Dr. Jerry Newcombe is a key archivist of the D. James Kennedy Legacy Library, a spokesman and cohost of Kennedy Classics. He has also written or co-written 23 books, including (with Dr. Kennedy) What If Jesus Had Never Been Born? and (with Peter Lillback), George Washington’s Sacred Fire. Jerry hosts gracenetradio.com Thursdays at noon (EST). www.truthinaction.org.

“In the beginning, God created the heaven and the earth…” Photos like this one give us a glimpse of the majesty of our great and almighty God.

This entry was posted on Monday, January 20th, 2014 at 10:45 AM and is filed under Commentary, Creation, LIFE, News, Words that Uplift. You can follow any responses to this entry through the RSS 2.0 feed. You can leave a response, or trackback from your own site.