The National Notice of Concern 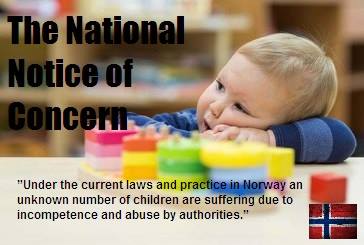 This Notice, addressed to the Minister of The Department for Children, Equality and Inclusion, has been signed by more than 200 professionals; about. 30 Psychologists, 50 Lawyers, a number GP’s and other Health Workers including Child Protection Officers, Expert Witnesses and University Professors.

A number of professionals due to career reasons, do not wish to officially state their support. The current situation within Norwegian Child Welfare Services and System gives rise to profound concerns. As professionals and responsible citizens we consider ourselves accountable for clearly warning as follows: Under the current laws and practice in Norway an unknown number of children are suffering due to incompetence and abuse by authorities.

As a society we should no longer accept the prevailing situation. Our opinion is that it requires mobilisation of a stronger commitment among all dealing with the challenges facing Norwegian Child Welfare Services/System (our abbreviation NCWS). This applies to child welfare professionals, politicians, media and the general social debate. We all have to ensure that children and their families are not exposed to breaches of their human rights caused by incompetence or decision making processes within welfare and care organisations. This is especially so, given that these same organisations are meant to create welfare and care of actual needs.

An increasing number of professionals in interaction with NCWS are increasingly understanding that the system, in many situations, falls short of promoting the interest of children, and that there is a need for comprehensive changes. Experience suggests that initiatives so far being launched or planned are insufficient or inadequate. Ministers and department heads have promoted changes, but obviously this is not enough.

We would prefer having confidence in the professional expertise and discretionary decisions of the NCWS, and that these would help ensuring well founded actions and decisions. Similarly, we would like to believe that the legal rights of children and families are being maintained by the courts and their expert witnesses. Professionals, who have examined individual cases, all too often discover a completely different reality.

We know that there are many cases, where statutory services have had to intervene in family conflicts and take over the care of children. Many NCWS offices address this extremely demanding task in the best way possible. At the same time we regularly observe examples, where NCWS appears to be a dysfunctional organisation performing erroneously with subsequent serious consequences.

We observe cases where NCWS is failing to recognize obvious child abuse and serious lack of care within families. Thus they do not act timely with adequate interventions, which might have saved children from an unacceptable life situation. In such circumstances developing and agreeing on better methods of assessment will help children, suffering due to lack of care, getting adequate help quickly.

On the other hand there are cases where the NCWS transfer children from their homes based upon very weak evidence, characterised by speculative interpretation, disagreement between assessments and conclusions, and missing quality of measures that might otherwise have brought about change.

A serious matter is the lack of legal rights for families resulting from the close link between many expert psychologists and the NCWS. NCWS is their principal and employer, and frequently engages the same psychologists for assessments of the same case, as initially related to sanctioning emergency decisions to take over child care. When the parents appeal decisions to county boards and onwards through the court system, they learn that the NCWS has appointed the same expert witnesses as in earlier parts of the proceedings.

For the experts these are well paid assignments, and many professionals have these child protection cases as their only source of income. Thus the assigned expert witnesses may easily prefer to state expert opinions that support decisions already taken by the NCWS. Thus we encounter a situation of serious conflict of interest, which may constitute impaired legal protection of the vulnerable families involved in NCWS decisions.

When expert witnesses submit their reports and give evidence in the Courts, we often see that the observational basis upon which they report is very weak. Hence, their assessments are easily weak and abstract. Nevertheless, statements by experts appointed by the NCWS are given excessive emphasis when presented in court.

Judges are frequently entrusting the decision to be made to the expert witnesses. In some cases the biological parents have sufficient financial resources to appoint their own expert witnesses to study their case. In these cases judges appear to place less emphasis on these alternative conclusions.
Witness statements from privately appointed experts are not given the same status as those made by experts appointed by statutory services. Far too often we observe that biological parents, without sufficient financial resources, do not have any chance of a fair hearing when faced with a large and powerful statutory service. Consequently, we see that once decisions have been based upon weak observations and unverified interpretations, they are applied through all levels of the legal system.

On the basis of the portrayed representation above we contend that care arrangement decisions in an unknown number of cases fails at all professional and legal levels, and that devised safeguard mechanisms do not function as intended. For the families concerned the consequences are serious. Immigrant families are particularly vulnerable –they lose their children without opportunity to understand Norwegian culture, such as e.g. the Norwegian zero tolerance for physical punishment in child rearing. Many immigrants have grown up with physical punishment through generations, and they sincerely believe this to be in the best interest of their child.

Trust, respect and dialogue are most necessary tools in order to change what in Norway is considered unacceptable child raising violence. In the absence of these tools, a crisis of confidence between the NCWS and minority groups will emerge. We have closely observed this situation in many Norwegian municipalities. When conveying the explicit Norwegian view of success and failure in building good child care, a more self-critical stance is needed. At the same time, in Norway we need to develop increased insight into specific expressions of emotional attachment and care, as these are exposed in other cultures.

At times there is a shocking disagreement between the competencies found within the Local NCWS and its power, which this public institution is authorized to exert over families. It is hard to envisage any other area in our society where public service interferes so radically in people’s private lives.

Today’s situation shows that many of the functions and services of NCWS are not functioning at a standard justifying its use of power. Within NCWS examples show that authoritarian and closed systems/cultures are nurtured, thus exposing children and vulnerable families with the risk of being abused by community decisions. Legal protection in Norway is challenged, when the voices of children and vulnerable families stand minor chances of being heard.

Hardship is felt particularly strongly by families having insignificant financial or social resources to initiate their own legal case, and promote this through the legal system. A naive belief held by many is that NCWS protects all children in the best possible way, and that the checks and balances built into the system are adequate.
Unfortunately, this reinforces a sense of powerlessness felt by those children and families, who experience the opposite. 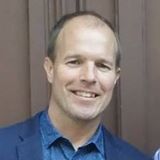 I found this Notice of Concern posted by one of my Facebook friends this week. Steven Bennett is a Christian man who has researched the Barnevernet thoroughly. He is a well-known activist outside of Norway who is concerned about the problems facing citizens there. From Austria, he has mounted a tremendous effort to share the truth of the issue via social media. Not only has he researched this subject in-depth, he has shared words of truth and encouragement with many, and he has done it all in a Christian way.

Here is Steven at the Symposium in Vienna:

This entry was posted on Wednesday, September 28th, 2016 at 8:06 PM and is filed under BIG GOVERNMENT, Commentary, Education. You can follow any responses to this entry through the RSS 2.0 feed. You can leave a response, or trackback from your own site.

9 Responses to The National Notice of Concern