Breastfeeding not allowed? The case of Amy J. 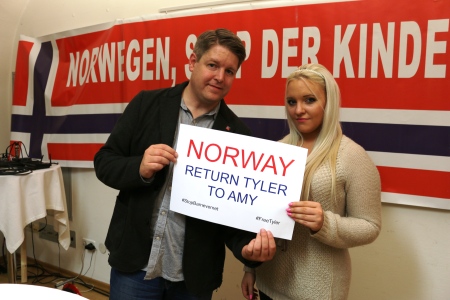 Amy J. is an American citizen who lives in Norway. In July 2013 her worst nightmare began. Without any warning, the Norwegian Child Welfare Services known as ‘Barnevernet’ accompanied by police knocked at her door, saying that her 19-month-old son Tyler had to be taken to a hospital for an examination immediately.

What happened? In the weeks leading up to the taking of Tyler, the young mother was increasingly concerned about the growth curve of her 18-month-old son. Tyler did not yet want to move to more solid food but instead continued to prefer breastmilk. Tyler was Amy’s first child, so she lacked the experience to know that children can develop quite individually. But, being a concerned mother, Amy even took Tyler for medical check-ups three times a month in order to monitor the growth process very closely. Then, came the summer. Amy went on a vacation with Tyler to America for two weeks and visited friends and relatives.

But, as soon as they returned back to Norway, the child welfare service, together with the police came to her house, saying that Tyler must be examined immediately in a hospital. Amy found out later that someone had alerted the youth welfare office in order to maliciously harm her. Being completely overwhelmed by the situation Amy agreed to go to a hospital with them. Also, Kevin M., the Norwegian father of the child came along. At the hospital a doctor diagnosed Tyler as “slightly underweight.” The boy would have had to weigh 10 kg, the doctor said. But Tyler weighed only 9.6 kg, which is actually not a reason for a concern according to the weight charts. The doctor also criticized that Amy was still breastfeeding her son.

Instead of offering advice to improve the nursing, the employees of the child welfare office now wanted to intervene on the basis of the medical diagnosis and remove the child from the mother. This led to a verbal confrontation which the father filmed with his smartphone. It’s a scene that can now be found on Youtube. “When will I see my son again?” Asked Kevin M. “We cannot tell you that yet,” replied one of the employees of the child welfare office. Finally, Kevin was ejected from the hospital as the argument got louder and louder.

What followed next was like a scene from a Hollywood movie. Kevin went back to the hospital and put on a doctor’s outfit. In disguise, he was able to go to room where his little son Tyler was taken in the meantime. He took his son unnoticed, left the building in a hurry, and drove around the area aimlessly, knowing that these might be the last moments with his son. Finally, he was stopped by several police cars. One police officer on the roadside even threw a big stone at the car, which nearly hit his child.

Kevin was then detained for one night for attempted child abduction. He was released the next day, because a judge realized that Kevin was the biological father and he still had parental rights. However, little Tyler remained in the care of the Norwegian child welfare office. For the time being the parents still had the right to visit and occasionally see Tyler – in a police station behind double-locked doors. But, a year later the visitation rights were cancelled. The authorities saw a potential abduction risk as Amy is an American citizen and they didn’t want her to take Tyler to America. In the following court trials this was also the main argument for removing parental rights from both her and Kevin. On September 22, 2014, Amy saw her son for the last time. Up to now both she and Kevin don’t know where Tyler is and how he is doing.

In order to hide the child’s new whereabouts, the authorities changed Tyler’s name twice. At the age of four years old, Tyler already had three different names. And, why did this happen? The Norwegian Child Welfare Services stated that they acted only in the Child’s best interest. But, how can such traumatic experiences serve the best interests of a child at such a young age? Especially, in the first years of life, the love and affection of the biological mother are known to be of great importance for the healthy development of a child.

Meanwhile, Amy has gone through all legal options in Norway to get her son back. In the spring of 2016, the case was rejected by the Norwegian Supreme Court. But, Amy doesn’t want to give up. Through a Christian initiative in Vienna / Austria, Amy was able to get in contact with international lawyers. They looked at her case documents, discovered Human Rights violations and helped her to file the case to the European Court of Human Rights. Also, the Christian initiative in Vienna showed further interest in the case. They launched a campaign on Facebook in order to raise awareness for Amy. They challenged people to post a selfie of themselves holding a poster which stated, “Norway, return Tyler to Amy”.

It is still uncertain how the case of Amy J. will end up. Once again, a family in Norway was torn apart for no good reason. Once again, a child in Norway was sentenced to extreme traumatic experiences. And again, we are supposed to believe that it served the welfare of the child. After the many worldwide protests and media reports, the government in Norway has repeatedly stated that it wants to look more closely into their child care system. But, so far Norway clearly fails to implement anything.

Björn comes originally from Germany. He is a radio station manager for a private Christian Radio broadcaster in Vienna / Austria. He is married to Hee-Jung from South Korea and they have two Children.

My comment: Amy’s is one of the three cases I am following in “Recent Accounts of Children Taken” at the top of this blog. Her story is bizarre yet, she is not unlike so many others in Norway.
I have known Bjorn for awhile now. I respect his continued efforts to help families like Amy’s.

This entry was posted on Thursday, December 21st, 2017 at 1:10 PM and is filed under BIG GOVERNMENT, Commentary, Education, News. You can follow any responses to this entry through the RSS 2.0 feed. You can leave a response, or trackback from your own site.

12 Responses to Breastfeeding not allowed? The case of Amy J.