BETWEEN HEAVEN AND HELL 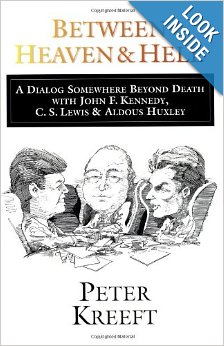 “On November 22, 1963, three great men died within a few hours of each other: C.S. Lewis, John F. Kennedy, and Aldous Huxley. All three believed, in different ways, that death is not the end of human life. Suppose they were right, and suppose they met after death. How might the conversation go?”

In his book, professor Peter Kreeft “imagines their discourse as a modern Socratic dialog..”

“Combining logical argument and literary imagination, Kreeft portrays Lewis as a Christian theist, Kennedy as a modern humanist and Huxley as an Eastern pantheist.”

Everything in quotes above can be found on the back jacket cover of this book published in 1982.

I thought a good way to begin the year was to recommend a book that looks at three different perspectives. If these three men could have had this discussion, it may have gone something like this. If you click on PHOTO SOURCE , the first few pages are available for viewing.

Of course, we’ll never really know what this conversation would have looked like. It probably would not have gone quite as smoothly (if one can call it that). An author has time to think of the main tenants of belief that men have and I would be surprised if each of the three characters would come “off of the cuff” with such quick responses. In spite of this, Mr. Kreeft has, I think, captured the “faiths” of these men and creates a dialog that represents three of today’s prevailing worldviews. As Eastern mysticism and humanism seem to be outpacing Christianity these days, I think the book is a good educational tool.

The book is an easy read; only 114 pages. I have the original but another printing was made in 2008 and I can’t imagine any changes being made.

If you have read the book or do so because of this post, I would appreciate your comments. I plan on reading this book at least once a year to stay familiar with views I don’t hold. In this conversation, I would agree with C.S. Lewis and his Biblical beliefs.

My son got the book online for under $4.

I hope you have a chance to read this interesting book.

It is May 19th, 2017. I have just read a review of another book by Peter Kreeft. You can see that review on my friend Maria’s blog HERE. Because of the information in Maria’s blog post, I will no longer be able to recommend anything by Peter Kreeft. In time, I may get a chance to reread this book to see if this entire post needs to come down. Until then, I’m leaving it up because, for whatever reason, I thought it was pretty good the last time I read it.